The late, great comedian Bill Hicks has been called many things: rebel, deviant, & philosopher. Most will agree, above all, he was a teacher. Draped in irreverent comic genius and razor-sharp wit, Hicks did his best to educate his listeners and turn them on to the realities of the world around them…and inside of them.

This print is a tribute to Hicks, quoting one of his most poignant observations: ‘It’s just a ride..’. 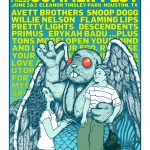 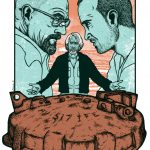