The Foo Fighters commissioned Jermaine Rogers to create the print for their recent appearance in Oklahoma City, OK. Measuring approx. 30×22 inches, it is screen printed on a lovely Pearl-finish gallery stock. The image is full of tributes: to Dave Grohl, to his amazing band, and also to another band which Dave has mentioned as a huge personal influence (and a favorite band of Jermaine’s, as well), the band Rush.

About the imagery, Jermaine says:
‘This entire Foo tour seems to be about worshiping at the altar of rock-and-roll. Worshiping the gods of the music. It’s no surprise that Dave Grohl really gets the need for his fans to have access and interaction. He attempts to make real ‘contact’…at least as much as is reasonable. The artwork for this print was done in that spirit. Grohl understands ‘fans’ of the rock-and-roll religion, because he is one himself.

From a signed and numbered edition of only 100 prints.

HIGH WATER’ Variant (Blue Water FOIL) –
Measuring approx. 30×22 inches, the ‘High Water’ variant is screen printed on Blue Water FOIL stock.  The stock gives the appearance of standing droplets of water resting on the surface of the foil stock. From a signed and numbered edition of only 2 prints. 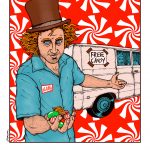 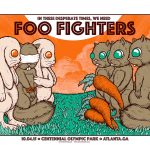