‘My favorite Quentin Tarantino film is ‘Jackie Brown’. The pacing, the story, and the rich array of characters make this film an enjoyable experience that never grows old. It’s a study in desperation: every single character in the film is desperately chasing SOMETHING. My two favorite characters in the film, and by far the most interesting relationship portrayed therein, are Ordell Robbie (Samuel L. Jackson) and Louis Gara (Robert DeNiro).

Ordell has a plan…one final ‘retirement’ plan to smuggle half-a-million dollars into the country, money that he has been hiding down south of the U.S. border. Ordell plans to use many pieces in this job, and one in particular is his old friend/partner/cellmate, Louis Gara.

We learn that these two did a stretch of time in prison around 20 years before the events of ‘Jackie Brown’. Afterwards, they pulled some ‘jobs’ together (no doubt of the ‘criminal’ variety).

Later in the film, as Ordell’s big money scheme begins to unravel before his eyes, he eventually turns on his old partner in a fit of rage. As Louis sits stunned and dying, Ordell asks him, ‘What happened to you?’. Then, in what to me is the best moment of the film, he says, ‘You used to beautiful…’

This moment and that line have always sparked my imagination. It’s apparent that Louis is not all ‘there’ anymore: he is mentally and physically awkward and slow. But, according to Ordell, there was a time when things were very different. It is from this time that the artwork on my print is taken.

In the city. 1977. Ordell Robbie and Louis Gara were out on them streets…young and nasty. Running game.
-J.R. 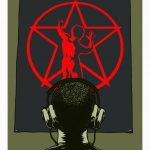