Queens of the Stone Age – Cleveland 2011

‘With so much revolution around the world lately… Egypt, Libya, Syria, etc, it got me thinking: what legitimizes ‘armed’ uprising in the world community’s eyes? The USA and several other countries are now aiding the ‘freedom fighters’ in Libya: these rebels are fighting to take Libya back village by village. Violence is occurring now that we will no doubt hear about years later in scathing stories from the victims of war.

We revere the non-violent revolution of MLK for freedom, but each year on July 4th we celebrate the violent and armed rebellion that created this country. What justifies ‘violent’ revolution in our culture? When does a ‘freedom fighter’ become a ‘terrorist’? Of course, it all depends on which side you’re on. But why are you on that side? Because you were raised on a certain part of the planet? Because your parents, your teachers, or the ‘god’ you choose to worship tells you which side to be on?

If Mohandas had seen it necessary to struggle for his freedom with the closed fist rather than an open hand, would history condemn him for it? When fighting for the freedom and rights of a life that is being beaten into submission, when do you condemn a man who decides to hit back?

I have my own opinions, and I reserve the right to change them at a moment’s notice. But images like this come out of these internal dialogues of mine, from time to time.’

Holographic Foil – Measuring 25 x 15.5 inches, this rare holographic foil variant is signed and numbered by Jermaine Rogers from an edition of only 25. 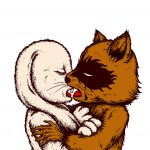 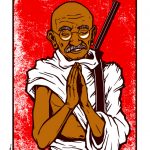