The imagery features a familiar rock-and-roll poster icon of sorts, as Jermaine explains:

‘Rock and roll’ saved my life…and in many ways. The music, the lyrics, the performances, the art work…and yes, the posters: they all served as little life rafts for me through the years. I built much of my adult life with the raw materials of rock and roll. I can’t imagine my life without it.

Many of you are familiar with the ‘flying eyeball’. It is a ‘rock and roll’ poster icon, used most famously on a concert poster by Rick Griffin for a 1968 Jimi Hendrix show in San Francisco, but used by other artists as well. Griffin was familiar with the mythology around the sacred ‘Eye In The Sky’, the all seeing eye that peers through human deceit & illusion. He was also familiar with SoCal pinstriper Von Dutch’s flying eyeball logo, a quirky take on the ancient icon. When Griffin’s version of the flying eyeball made it’s appearance, something was different. This eyeball hovered visceral and aware, with a glare that burned through you. It’s stare was arresting, taking an accounting of you, measuring you as a human being. Some have commented that Griffin sometimes spoke of the eye as ‘god’.

To me, an artist who’s life has been greatly affected and transformed by the rock and roll poster, the eyeball IS ‘rock and roll’. It is the perfect visualization of the aura and the experience. It is rock and roll’s ‘holy ghost’. This music, and the art that is intertwined within it, is a living thing. It peers into your soul, discerning thoughts and intentions, motives and fears. In my darkest hours, it showed me a way out and gave me a way in. It helped define for me purpose and repeatedly showed me ‘roads less traveled’, cramped and waiting there in the shadows if I dared to wander upon them. The visual art of the rock poster, specifically, is a breathing and pulsing religion. For me, it’s prophets were men like Rick Griffin, Stanley Mouse, Wes Wilson, Guy Juke, Ray Pettibon, Mad Marc Rude, Frank Kozik, and others…all pointing the way to a freedom that COULD be had. ‘Rock and roll’ showed me ‘hands’ that I didn’t know I had. So, i knelt there…bare and exposed, and let the music and the art wrap themselves around me & absorb me whole.

Queens Of The Stone Age is one of those bands that is the very personification of rock’s vibrant and uncontrollable nature. The music, the pose, the euphoria: it’s all there. And even as QOTSA rips apart some of the biggest stages on the planet, ‘rock and roll’ is evolving. In little garages, in kids’ bedrooms, in little dive bars all over the world: rock is reforming itself into something totally new, possessed by the ghosts of the past. You’ll never guess when or where or how it’s going to happen.

That’s the part that absolutely rules.

I love rock and roll, and this print is a love letter, floating on the soundtrack of Homme’s screaming guitar.’

ARTIST EDITION –This screen print measures approx. 30×20 inches and is printed on white gallery stock. The print features brilliant inks, including a lovely gradient fade. The show edition of this poster was printed on cream stock & sold out quickly at the event. This is the rarer artist edition, available exclusively from Jermaine Rogers. This print is part of an artists edition of only 100 pieces, signed and numbered by Jermaine Rogers.

SILVER HOLO FOIL EDITION – This screen print measures approx. 30×20 inches and is printed on SILVER HOLOGRAPHIC FOIL stock. The print features brilliant inks, including a lovely gradient fade. From an edition of only 15 pieces, signed and numbered by Jermaine Rogers.

GOLD MATTE FOIL EDITION – This screen print measures approx. 30×20 inches and is printed on GOLD MATTE FOIL stock. The print features brilliant inks, including a lovely gradient fade. From an edition of only 15 pieces, signed and numbered by Jermaine Rogers. 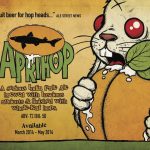 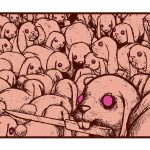