We Carry Each Other (Japan)

Measuring approx. 24×16 inches, this print was originally produced to aid in raising funds for the Red Cross in the wake of the Earthquake/Tsunami of Japan in 2011.

A word from Jermaine:

“Well it’s been a few weeks since one of the most devastating natural disasters of our time: the horrible Japanese earthquake and subsequent tsunami and nuclear meltdown at the Fukushima power plant. I was up working on artwork at 2:00 AM when i first saw the coverage. Like everyone else, I was horrified… watching aerial shots of black water flowing across the landscape. The news commentators seemed to purposely ignore the cars that were on the roads, in clear path of the tidal wave… the camera footage always mercifully cut-off before those cars were swept under.

Then, of course, there was the nuclear disaster, which will have long-reaching effects that no one can really predict or fully comprehend at the moment. It’s no fun to talk about, so I’ll stop. What I do want to talk about is a new print I’m releasing entitled, We Carry Each Other: Japan. A portion of the proceeds will be donated directly to the Japanese Red Cross Society.

As far as the imagery goes, many of you may remember an art print I did some years ago called We Carry Each Other (the imagery was also used for a Deftones gig poster in 2006.) The feeling I was attempting to convey in the artwork was one of co-reliance. Communal existence. ‘Your issue can be my issue, and visa versa. We will exist together. We will carry each other.’ You could share this feeling with best friends and family. You could share it with lovers and partners. But you could also be prepared to share this feeling with strangers… and THERE is where you can truly transcend. You could go on choosing to feel and view others this way for the rest of your life.

With these same ideas, I present this new art print, based on the original concept of the bunnies clinging to each other for support and security. Our brothers and sisters in Japan need a bit of help after this disaster. There are Japanese parents trying to figure out how to rebuild their family homes. There are Japanese mothers praying that their little babies didn’t get lethal doses of radiation from the nearby Fukushima power plant meltdown. There are young adults trying to figure out what’s next. There are children who are traumatized… forever changed. The day before the earthquake, they’d never seen a dead body: 24 hours later, the sight of corpses had become commonplace. There are orphans and widows. And there are thousands of people who are, simply put, mental and emotional wrecks. And though the quake isn’t the lead-off news story here in the States anymore, it’s with them everyday.

When this incident happened, my natural instincts kicked in… and I began searching for a way to articulate my feelings artistically. I do this mainly for me: it’s how I deal with things. Sometimes, things are going nuts in the world. And often simultaneously, certain little rooms in your life are falling apart. You think about mortality, and security, people you love, people you despise. There are times when I get really scared… my entire body and mind are tense and alert. It’s very ‘animal.’ At those times, ‘the art’ is a healer. The sadness I felt looking at earthquake footage was heavy. I let all sorts of artwork pour out over several days. But nothing I drew really captured what I was feeling. Then, one afternoon at the studio, I looked over on one of the shelves and saw a copy of the We Carry Each Other print from 2006. It said everything I was thinking perfectly.

The Japanese text on the print are characters used to convey the idea of ‘support and co-reliance.’ I hope you like it.”

Initial funds from this print raised a few thousand dollars for the Red Cross. 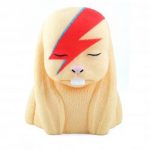 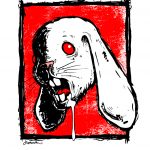