“Isaac Asimov once said the following: ‘Anti-intellectualism has been a constant thread winding its way through our political and cultural life, nurtured by the false notion that democracy means that “my ignorance is just as good as your knowledge.”‘

I won’t try and re-state this, as it would disrespect the flawless aspect of the quote. I do believe that one day, human beings will look back at our time and marvel at the relentless way some of us held on to well-worn stories and beliefs in the face of emotionless science. In the week since this poster was released at the show, I’ve received several interesting emails, from one accusing me of pushing a ‘personal agenda’ in an arena (a concert poster) where it was ‘inappropriate’, to another saying that they knew I had a ‘good heart’ and that they would pray for me.

I just think it’s an interesting exercise to dress old stories of ‘faith’ in a bit more of a ‘factual’ clothing. Call it a compromise.

And to anyone else who thinks it’s improper of me to make personal statements, push personal ‘agendas’, etc. in my artwork, just because it’s on some ‘concert poster’…well, you haven’t seen some of my work from the past. And, man…if THIS print bothers you, you’re going to absolutely HATE some of what I’ve got planned for 2012: it’s an election year! Don’t tell me rock and roll has nothing to do with social issues and politics: rock and roll EXISTS because of these things.

Artist Edition – This print was commissioned by the mighty WEEN for their Oct. 31st show in New York City. This 7-color screened piece measures approx. 30×20 inches and is printed on white gallery stock. The show edition sold out quickly at the event. From a signed and numbered edition of only 100.

FOIL EDITION–Printed on holographic foil stock. From a signed and numbered edition of only 25. 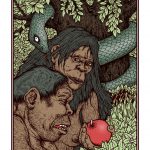 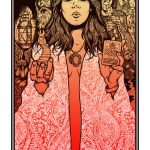