Jermaine was commissioned by the Foo Fighters to create a limited edition print for their 20th anniversary show at RFK Stadium in Washington DC on July 4th. To celebrate the event, the band opened a special ‘Pop Up Shop’ at Union Station in Washington, DC, where several limited edition FF items were made available.

The poster was screen printed on white gallery stock and exclusively available at the Pop Up Shop. The signed and numbered edition of only 250 posters quickly sold out.

This piece measures 26×22 inches and is printed on gallery cream stock. It is strictly limited to 100 pieces.

Discussing this image, he says:
‘The Harpies…the bird-men. They are known by many names in many cultures. They’ve appeared in several prints that I’ve done over the years. Always watching, always hovering, always taking…stealing bits of your soul away, a little at a time. Grohl sits among a swarm of them. Unafraid. He’s been through the fire: he’s got ‘scars’. On the debut Foo Fighters record, he sang a song…and told us that he was ‘exhausted’. That was the FIRST record…and he’d already been around the block. I think he had a previous life before Foo Fighters. 😉

So, he calmly sits amidst the flock of the soul stealers. He’s looking straight ahead. He ain’t phased one bit. ‘Cause he’s a mad-music-warrior-man, goddamnit.’
– jr

From a signed and numbered edition of only 100 pieces.

ORANGE CREAM VARIANT – This piece measures 26×22 inches and is printed on Orange Cream gallery stock. It is strictly limited to 15 pieces.

FROSTY VARIANT – This piece measures 26×22 inches and is printed on Light Blue ‘Frosty’ gallery stock. It is strictly limited to 15 pieces.

LASER RAY FOIL VARIANT – This piece measures 26×22 inches and is printed on ‘Laser Ray’ FOIL stock. It is strictly limited to 5 pieces. 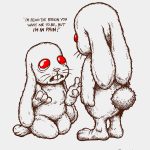 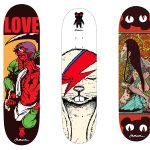