Jermaine was commissioned to do the limited edition prints for both nights of Eddie Vedder’s (Pearl Jam) recent solo appearances in NYC at the Beacon Theater. For the first night, Jermaine arranged to do a collaboration piece with fellow artist Frank Kozik. These two artists collaborated last year on a print for the Alice In Chains/Deftones tour: it was so much fun, they decided to do it again.

Measuring approx. 24×17 inches, this 6-color screen print is part of a signed and numbered edition of only 100 copies.

Regarding the imagery, Jermaine says:

‘I wanted to do something a bit different from what has been done recently for Ed, and he was very open to this. So, we decided to give everyone a glimpse of a distant time in the future when the lovely animals of earth have inherited everything that human beings have pissed away…or had taken from them. Two of our friendly future beasts explore the ancient ruins of what surely must’ve been a grand ol’ place…at least, once upon a time. Doing that evolution….’

Signed by both Jermaine Rogers and Frank Kozik.

BRONZE EDITION – Measures approx. 24×16 inches and is printed on Bronze metallic matte stock. From a signed and numbered edition of only 10 pieces.

SLATE METALLIC EDITION –  Measures approx. 24×16 inches and is printed on black slate metallic matte stock. From a signed and numbered edition of only 10 pieces. 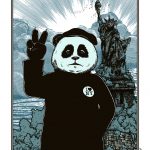 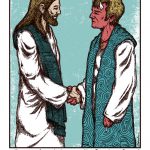